Xaver graduated with a Master of Business Administration from the University of Cologne and began his career as an auditor with Arthur Andersen. He then worked for two years as a controller with Hoffmann La Roche in Switzerland. He joined InterFinanz in 1987, became Managing Director in 1991 and ascended to Managing Partner four years later.

In the course of his career, Xaver has gained expert knowledge in the automotive, electronics, machinery, pharmaceutics, and publishing sectors.

He serves on the advisory board of the Commerzbank AG and is an active member of the Ludwig-Erhard-Stiftung, the Industrieclub Düsseldorf, the German Chamber of Commerce and the Rotary Club Meerbusch.

In addition, Xaver is highly sought-after speaker and editorial contributor, delivering numerous speeches and publishing several leading articles about the M&A business in Germany each year. Since 2001 he has been writing and publishing the InterFinanz annual report for clients and business opinion leaders. 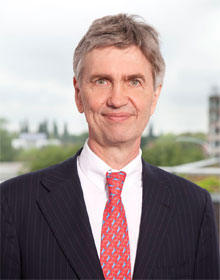